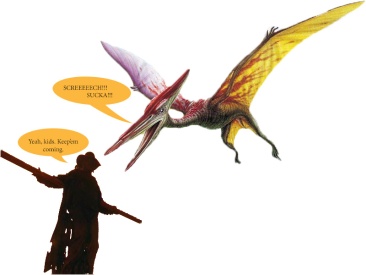 I was doodling a pterodactyl at a print shop while waiting for a print job when it occurred to me that my doodle was insanely similar to the creature from a horror film I watched few years back — Jeepers Creepers.

The creature is a humanoid monster with a face of genie from the Wishmaster franchise, long gray hair, black fedora, and — wait for it– a huge span of wings that looks like pterodactyl.

Aside from the pterodactyl similarity, the Creeper has a demonic origin story, being indestructible and resurrecting itself in 23 years for 23 days. So, basically Demon Jesus.

The 1st film Jeepers Creepers was immensely scary, but the sequel was more of a thriller. Why? The teenagers stranded on a road were getting swooped by the Creeper. That wasn’t as scary as the first part, and let me tell you why in a minute.

Horror films tap our primal fear. According to the Wild Life of Our Bodies, a book I haven’t read but am dying to, most horror film creatures resemble canine predatory visage, precisely because back when our prehistoric ancestors dwelled in caves, saber-tooth tigers and leopards were the bane of our existence. That’s why, even in modern times, when people see a film of a creature in the safety of a movie theater, our ancestral urge pumps in and raises our body hair.

But the Jeepers Creepers 2 is not as scary as the first part, because pterodactyls didn’t live long enough to terrorize our ancestors, and we have no primal urge of getting swooped by a large aviary creature of prey.

Sure, eagles swoop down on lambs, sheep, and even wolves. But not humans. They can’t do that. So, my theory is if we ever develop a technology to “uplift” other creatures’ intelligence to sapience (a la David Brin’s Startide Rising), the sheep and the dogs will get a thrill out of Jeepers Creepers 2 indeed.

While we’re on this topic, the concept of horror movies is crazy. You watch scary, disgusting and creepy things and go near pissing yourself, but in the end you enjoy it and you probably will pay more to see something again. Or at least you say you enjoy it because you’re a guy and don’t want to admit that to your friends, especially female friends.

Then there is the issue of horror filmmakers pushing the boundary of verisimilitude to make the story haunt you even after you finish the movie. They would say a ghost flick was based on a true story or make a film based or inspired by a real serial killer. You almost don’t have to suspend your disbelief anymore.

With the brain consuming stories as if living it, horror films will most likely have harmful impacts to your personality. With that being said, I can’t wait for the Jeepers Creepers 3: The Cathedral.

Famous Faces Who Visited This Blog